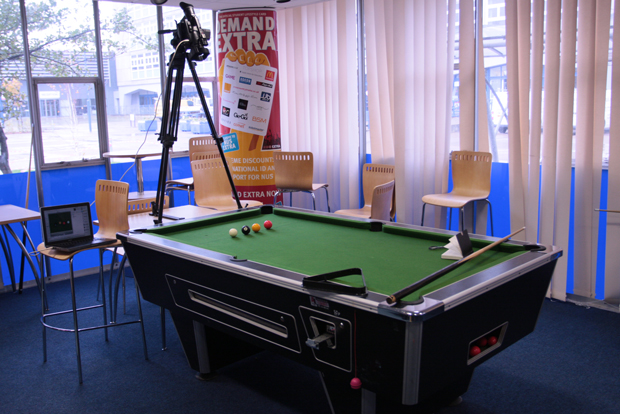 Inspired (or provoked) by the physics modeling and general “bally-ness” which seemed to be a key feature of many of the software examples we looked at today, I thought I would have a go at tracking, mapping and replicating some of the movements and collisions taking place on an actual pool table using processing.org.

The pool table is a kind of archetypal piece of furniture in the social spaces of youth centres, prisons and pubs which is approachable, understood and non-threatening for most people and, in Re-Dock projects, we have often made use of pre-existing (and quite mundane) interfaces, platforms and contexts in order to introduce and involve people in new and thought provoking ideas so this seemed like a comfortable place to begin experimenting. 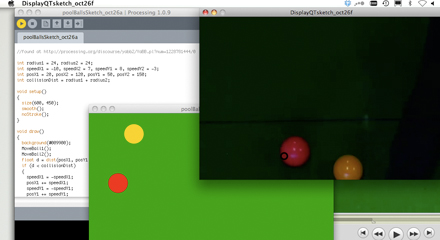 By using, hacking and combining various pre-existing colour tracking and computer vision libraries I was quickly able to track the movement of the balls.  Another interesting and unanticipated find was the fact that the green baize of the table (obviously!) would make a tremendous green screen for transplanting in background media like video.

I think that there is a lot of potential in these early tests and experiments for creating new kinds of media landscape which use the pool table itself as interface and the balls as media content place holders, however this is not an avenue that I will explore further during the residency.  Instead, these were worthwhile experiments in themselves – they allowed me to ‘warm-up’ in terms of using and re-familiarising myself with the processing.org platform and also to stay in touch with ‘physical’ objects – and not get too drawn into concerns regarding the technology of the touchscreens at this early stage.