This morning I was keen to get cracking with gathering some data and playing with some tech. Dave had showed me the Mindwave EEG headset, which is more accessible than the Epoch one that I had brought along in terms of use-ability in participatory contexts but after some wrangling discovered that the software for exporting data from it didn’t want to work with my PC. So I set about familiarising myself with my EEG toy and gathering some data.

Fascinated by all the activities happening in the house I realised this was a prime opportunity to record the brain activity of makers possibly in flow. Toni was to be my first guinea pig and once  set up with the headset having run through the ‘training’ in the software we set abut filming her whilst doing some stitching. By filming Toni’s hands and recording my screen tracking the brain activity I was able to see any change in state in relation to physical activity.

Toni’s states seemed pretty steady, she was clam and engaged for most of the recording and her mediation levels were consistent. Toni did admit she struggled to capture the same ‘flow’ she thinks she experiences when stitching in her studio though. I felt pretty privileged to be the single audience member to a 46 min session and kind of wished I’d worn a headset myself as I could sense my own excitement levels fluctuating throughout, partly affected by the vibrations from the speakers, partly my reaction to watching the changing data from Shelly’s headset.

Hwa was also a keen volunteer for the donation of data and we recorded her doing origami. She made one piece with her eyes closed, a crane, which is a sequence she is very familiar with, and then made another less practised fold with her eyes open. 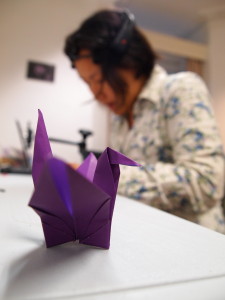 The results from all the recordings were really interesting with clear moment so excitement and concentration.  I know have to work out how to interpret and use the data through pattern and code.

Up until now I haven't said anything about the past three nights and two days. Mainly because I hadn't quite known…

Over the last 30 years my work has primarily been creating video and installations. These have included giant outdoor projections,…