Today we begun with introductions to a number of different programming tools including Quartz Composer, VVVV and Processing. I began to think more about the act of touching the touch screen – about the conceptual shift that occurs when you imagine the tip of your finger interacting with the computer screen rather than the mouse cursor.

No doubt influenced by my role as Syndicate Secretary for the Artists’ Lottery Syndicate and by my wider interest in ‘alternative funding strategies’, at some point during this introductory session I wrote the words ‘scratch card’ in my notebook. Then, as soon as the demonstrations were over I headed down to the nearest newsagents to buy myself six National Lottery scratch cards – a mixture of £1 and £2 games.

I was interested in replicating the scratching action through the touching / rubbing of the touch screen. I wanted to make a simple / quick experiment to visualise this and to try it out. With the help of Ben Dalton, I was able to get a simple prototype running in Processing before lunch time, which you can view here. 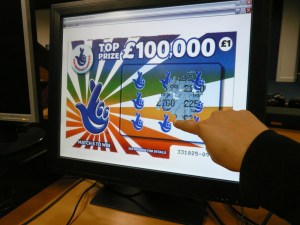 Once I was able to see and interact with this experiment on the touch screen, I began to think more about the ideas behind it. I like the idea of the ‘potential’ contained in the unscratched card – the possibility of winning the prize. But, unfortunately, because the card I scanned in did not win any prizes this potential was quickly dissipated once its surface was removed. It is demoted to a completely valueless object, and even more so as a screen representation of a losing card, rather than the card itself.

If this piece was shown in a gallery, I like the idea of it only being reset once a day, so that only one or a small number of people get the opportunity to interact with it. Once it has been fully scratched, it is no longer interactive. It no longer contains any ‘potential’ or value.