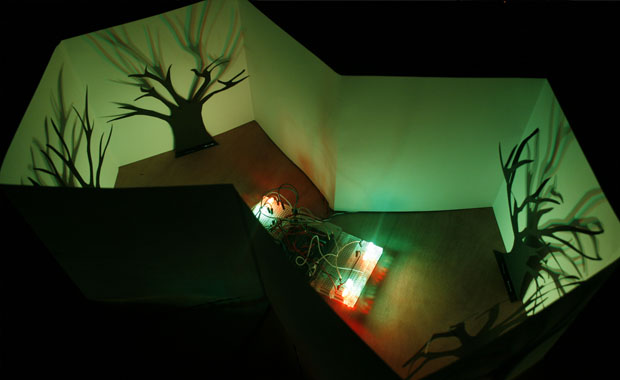 I have put together three experimental works for tomorrows presentations today. They are all unresolved to different extents, however I feel they demonstrate my progress in terms of how to consider the possibilities of interactive artworks.

The light model that Stuart Childs and I have been collaborating on has turned out well, and demonstrates the idea of controlling things outside a building from within. The sensors on the outside of the structure represent touch screens, and when touched they illuminate the LED lights in the centre; which then light up the tree silhouettes and project their shadows on to the paper structure.

I feel the eye work that I have entitled ‘Poke’ is the most resolved piece I have developed on the residency, and I would like this to be part of the exhibition next week.

I have also being experimenting with the bird idea I mentioned in my last post. I took some found footage of an owl to try out the processing code. Although it’s not a resolved idea it can be developed in the future and rigged up to a door, so that when someone walks in to the room the bird captured flys away as if disturbed. 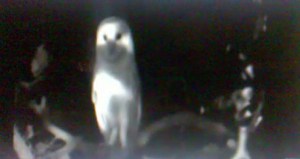 My ideas have begun to take shape today, and i'm really excited about the many…