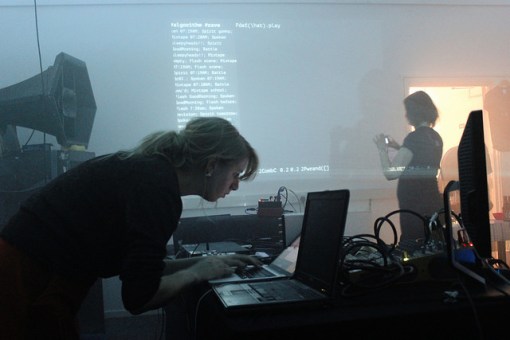 Shelly is a data-musician who presents live-coded and network music internationally, collaborating with computers and other humans.  She has received several commissions and residencies and was part of Sound and Music’s ‘New Voices’ emerging-composer development scheme in 2014-15.

She is studying for a PhD with Nick Collins and Peter Manning at Durham University. Her research interests lie in the political practices implicit in collaborative network music performance practice and designing systems which play with particular data structures for algorithmic and improvised music creation.

Monday (yesterday) was mostly heads down scrambling thoughts and making rapid prototypes. At least that what everyone else was doing.…

That boulder was heavy. I am hoping he reappears before the week is out. To myself I say, "Spend more…

This morning I was keen to get cracking with gathering some data and playing with some tech. Dave had showed…