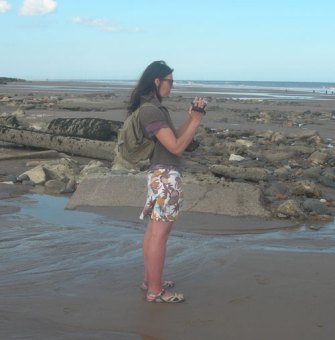 Monika Dutta has exhibited on an international scale and worked collaboratively to deliver works that interrogate the role and impact of new media practice. She produced award winning film 6 goats in 2004, after which she began to develop custom applications that facilitate live animation and moving image manipulation for performance alongside sound artists and musicians, undertaking her first audiovisual performance with sonic duo pavlov at the 404 International Festival of Electronic Arts in Rosario, Argentina.
She is currently examining relationships between entrenched systems of production and market forces in the context of our food and health, whilst also exploring possibilities in constructed textiles by building relationships between binary code and the practice of knitting.

As a participatory artist, I magnify and expand textile processes, utilising accessible materials to engage audiences. With a focus on…

I’m an artist, musician, and maker based in Leeds, UK. I like to think my work comprises entertainment, accessibility, and…

I'm a Brazilian multimedia artist based in Liverpool, my background is in physics, mathematics and computation. I've been using technology…

Most of Saturday was about Ben Dalton's charity shop challenge. I teamed up with Gina to scourge the second hand market…