I began a conversation around the dinner table earlier in the week about the cultural and technological alienation I’m beginning to feel from people 5 years younger than myself. As one of the younger attendees of this year’s lab, I’m sure my comments attracted some bemusement, but it’s something that’s been bothering me for quite some time. The feeling has highlighted other issues that I have with the longevity of the technology and Internet culture – or lack thereof – that Toni Buckby and I tried to explore during our first afternoon of practical exploration.

This quote from Jordan Koschei goes pretty far in explaining how I feel. I implore you to read the full article if you don’t believe me, and note that it too feels dated, despite being written only a couple of years ago:

We’ve tied up so much of the human experience in transient things that generation gaps now occur closer and closer. Even kids two years apart will have grown up in completely different media environments…

I’ve approached the week so far embracing a sense of play, fired by a keenness to incorporate more game-like elements in my work as I progress. I brought this with me to the lab by creating a game for us all to play as a part of my introduction to the residents. The Mashing is a game for up to 10 players, exemplifying what I feel to be quite a pure form of button-mashing. Dave caught a pretty good example of the deciding round of our tournament earlier this week:

Somewhat unwittingly, Toni and I stumbled into an exploration of the longevity and shelf life of games by picking up a large box of Scalextric track in Age UK. Our initial discussions on the way over to the shop had focused on the expiry of media formats – both in terms of their literal degradation, and their cultural abandonment – after I mentioned that I’d harvested parts of VHS cassettes, purchased in charity shops, to help create Physical Echoes.

At the other end of the scale, we located a couple of small oddities at the bottom of a toy box, which sparked (less literally than the Scalextric set) another set of questions and ideas. The items in question are two Cupets, small cube-shaped animal figurines with QR-codes atop their heads. Having never heard of them, and locating them at the bottom of this dusty box, we immediately assumed that they must be bygone trinkets of an expired fad. It transpires that our assumptions were fairly accurate, and that these are indeed physical counterparts to a Tamagotchi-esque mobile application, which are imported into the digital game by scanning each Cupet’s QR code.

The eminent datedness of these objects was not helped by the presence of QR-codes, one of those never-quite-adopted-or-understood-but-seemingly-everywhere-a-marketing-team-has-been type of technologies (excellent joke about that here). This sense was heightened by my knowledge of Skylanders and Amiibos, popular NFC-enabled figurines that allow players – predominantly children – to transfer the characters represented by their physical toys into the digital environment on screen.

(Aside to residents: the doom-laden sentence I mentioned at dinner last night follows)

It struck me – from a slightly melancholy perspective – that the Cupet figurines become essentially redundant once they’ve been scanned and redeemed in the app, essentially killing off the creature in the physical space, ready for its animated afterlife in the digital realm. 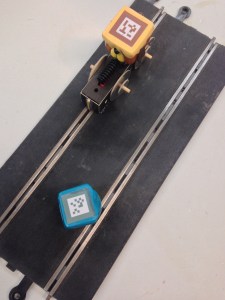 A couple of Cupets. One of which has been converted to be compatible with Scalextric track.

Flying in the face of this unidirectional communication between object and application, we thought we’d revive and relocate the objects to receive some digital input of their own. To facilitate this, we planted it on another now stranded platform: the Scalextric track. By electrifying the metal lines that run through the iconic plastic roads, we were able to send communication signals from an Arduino board through them. While we didn’t have enough time or components on hand to properly integrate the technology, we proved the concept and were still able to power a DC motor from a robotics kit acquired by 2014’s lab residents.

What followed was a frustrating foray into the world of building our own Scalextric car…a description of which I’ll omit from this post.

I’m keen to explore the prospect of micro generation gaps further as the week goes on. It’s also only just struck me that so much spent energy and resources are now tied up in redundant objects, from toys to tape cassettes. I’m interested in maybe adding a little forwards-compatibility to these objects… 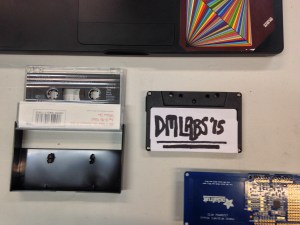 Tapes picked up during our exploration of Barrow…complete with a ropey-looking handwritten label, just like the ’90s.

Up until now I haven't said anything about the past three nights and two days. Mainly because I hadn't quite known…