Already Sunday – 3rd day into the residency. I have been trying to be offline & low-tech as much as possible this year – going through a bit of a digital detox. Perhaps a bit contrary to a Digital Media Lab.  However, as the it’s #digitaloutsider, perhaps it’s not too off theme. Most of all, I am looking forward to a week free from deadlines, goals, outcomes, expectations and assessments.

I was musing on the 2 hour train ride up about what I’d like to do during the week. When I changed at Lancaster to the slow train tracing the Cumbrian coastline to Barrow-in-Furness my mind starting drifting from being productive to day dreaming about salt marsh sheep and wondering if the book store at Grange Over Sands had any openings. People started dripping in throughout the afternoon, taking over the kettles in Piel House. Hellos, welcomes, nice to meet yous spilled out in the lovely park before the vegan communal dinner.  Of the 10 artists, I have personally met four (James, Tim, Radamés, Gemma – listed in order of meeting them) and had seen seen Gina‘s work a few years ago.  It was nice that I knew some people in advance, and therefore my brain didn’t go into melt down trying to cram in TMI the first evening of the lab. This happened the next day during the presentations anyway, but in a good challenging way. Very good to meet new people, and works of art in the digital medium.

Mostly out of laziness, but also part of my detox, I didn’t crack out my laptop till this morning. During the presentations on Friday, I took notes on the new notebook I purchased exclusively for DML. It was also pleasurable to take notes because I had recently repaired an old fountain ink pen – the joys of which I’d forgotten about. To me, the physical gesture of making marks with a weighted pen is akin to coasting downhill with your hands behind your head on a well oiled bicycle. Also the paper is a nice thickness (and acid free).

Common themes I picked up on during the presentations are

The most encouraging thing I felt was the openness of the residences in sharing their practice, thought processes, methodologies and even struggles. The idea of failure as a positive opportunity to learn was mentioned, which is something I feel isn’t talked about. I’ve tried to think about my work as perpetually in experimentation phase. Something that doesn’t have an end – and therefore can’t be fails – yet/ever. It’s comforting to delude myself to this state – something that’s not really grounded in reality. But that’s what this week is. Suspended and cut off from the day to day real world of consequences, criticisms and repercussions. 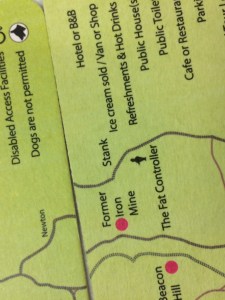 Images are part of the Islands of Barrow Beer Map by Art Gene.

Hwa Young is an award winning multi-disciplinary designer working in the arts, cultural and sciences, facilitating collaborative workshops and…