Day 3: I feel a bit better about things today. Had a clarifying and enthusing talk with Benedict about the project. Think it helped me relax quite a bit, hope that doesn’t prove to be a bad thing. He also suggested a good idea that I’d like to pursue further, which involved interactive characters in a non-linear story. Touching the characters would effect their mood or change their personalty.

I also like how in early cartoons, particularly Warner Brothers, they do a lot of sight gags which play on people expectations…classic example, when Wile E. Coyote runs off a cliff but only falls when he realises his situation. I’d like to play with that idea of subverting reality.

I spent most of the morning looking on the internet at interesting things. Got quite inspired by the work of Scott Snibbe. Who I stumbled upon through googling interactive animation. He’d also written an interesting article which I’ve posted on the blog. I looked at the work of Dane Watkins . Who I was aware of previously. He does a lot of animations on interactive screens. A few of his works seem to deal with peoples’ expectations and our need to define ourselves and other in fast and simplistic way. Using tick box questionnaires, like the kind you find in naff women’s magazines, and using nonsensical questions and getting them to react to abstract animations.

Found some interesting videos on youtube. One very short video showing a 2d drawn animation reacting to a real world hand. I’ve always liked this use of animation ever since I saw it in Roger Rabbit. There was another short video of a 2d animation where the animator’s drawings were coming to life as he drew. Really like this effect too. Thought this could translate to touchscreen well. But instead of drawing the picture you’d have to rub and reveal a drawing, that would then animate. 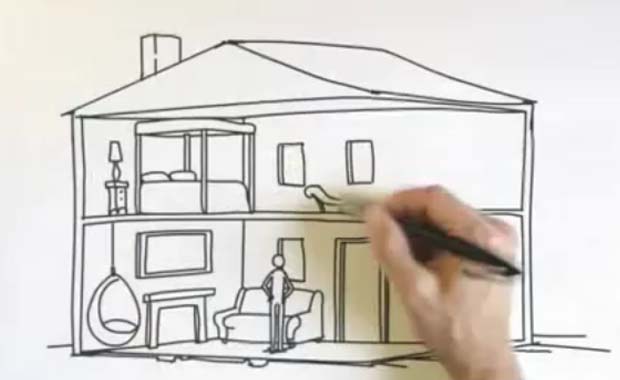 Although it didn’t really spark any idea I found another youtube video about an early interactive-animation computer system called Genesys. Seemed weird watching such dated retro footage of something that looked technological out of place in the 70s. I like the juxtaposition of that.

In the Afternoon we had a talk from Peter Eyres about Intellectual copyright and pursing alternative funding strategies in the light of ever decreasing funding for the arts, and what the implications these different strategies have on art and the people involved in making it. After the talk we split into two separate groups to tried and plan out funding strategies. One group had to fund a project for social benefit and the other a project for money making. It sparked lots of interesting discussion. Which I’m sure other people will talk about in greater depth in their blog entries today.

Our visit to the Wilberforce site got shifted from today to tomorrow. So hopefully that will provide us with more food for thought. And I think I have my dreaded presentation tomorrow. I hope it won’t be as painful as I’m imagining it to be.

so many questions, so little time

Day 2: This morning we were introduced to a few different visual programming environments and…

A winding journey through technology

Trying to find nice examples of touch screen art feels hard to me. A few…